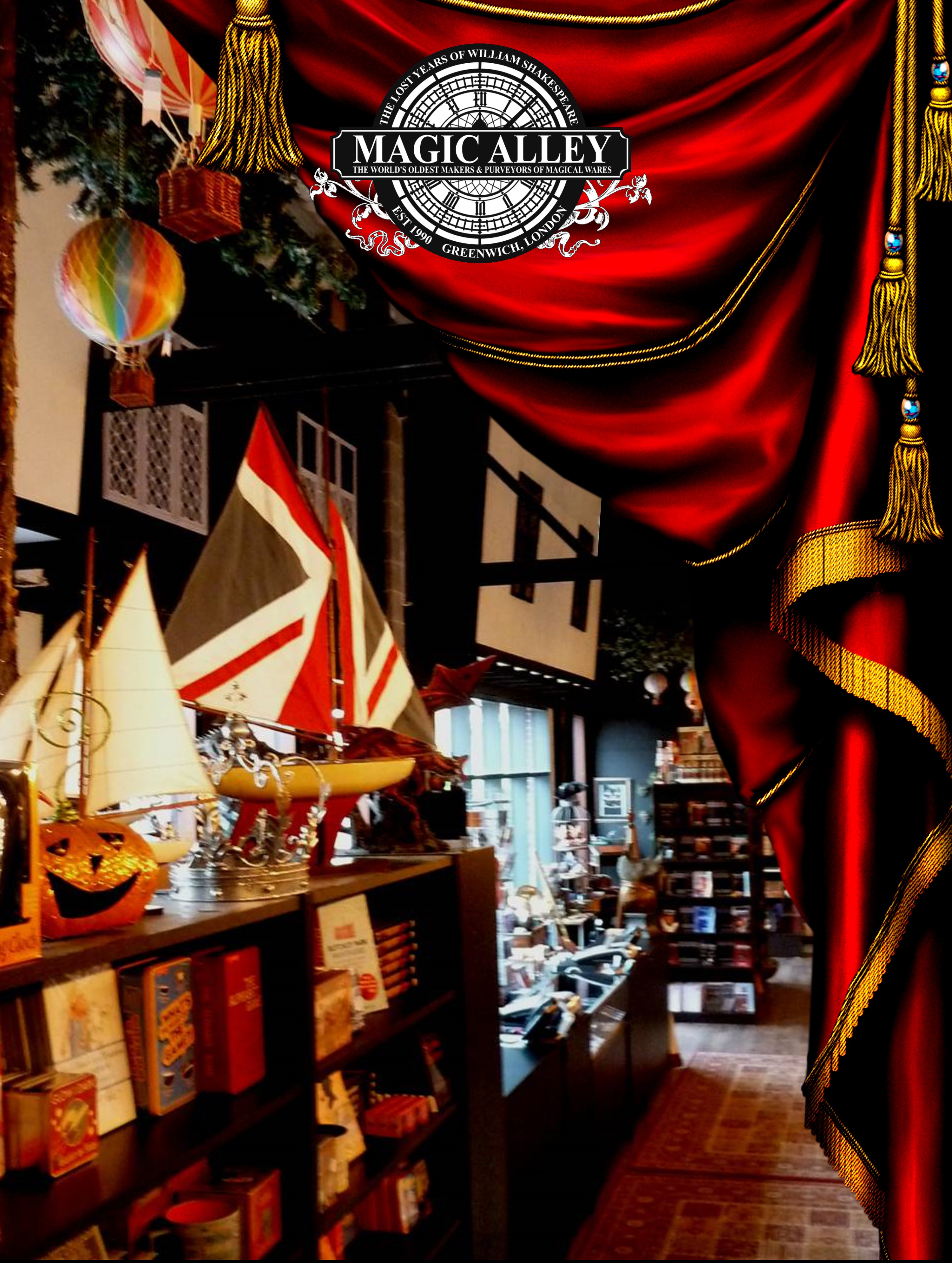 Stratford’s newest and most whimsical “old” attraction has thrown open its doors after moving home to the newly reimagined Bell Court right in the heart of town. Spread over 4,500 square feet the new Magic Alley promises much and delivers more – much more!

It’s an established fact that all the most amazing stories start with the same question: what if? And the story behind Magic Alley is no different.

What if you found an old lamp, rubbed off the dirt and a genie appeared? what if you hid in an old wardrobe and realised that it lead into a magical world? What if you fell down a rabbit hole and ended up in a crazy wonderland?

Or, perhaps, what if William Shakespeare had been a time travelling wizard?

Magic Alley is family lifestyle, adventure and imagination destination for the explorers, dreamers and storytellers of the world. the experience invites you to dream again; to suspend your disbelief for a while and embark on a magical adventure that brings a brief respite from the pressures of everyday life.

From the moment you step through the doors and realise that it really is bigger on the inside to the moment you journey through a full sized street packed with magical objects and curios that you never knew you needed you are surrounded by the magic of storytelling.

The possibilities are endless…

Most people think of William Shakespeare as a great poet and playwright, but during the period 1578-1584 and then again from 1585-1592 (commonly referred to by scholars and historians as “The Lost Years”) no-one has ever really known what Will got up to… until now that is!

So if you’ve ever wondered how he went from being a relatively uneducated 14 year old schoolboy to the world’s greatest playwright some 14 years later then this is what you’ve been looking for. Welcome to Magic Alley & the World of Wizards Thatch where we explore the Lost Years of William Shakespeare.

Magic Alley is packed to the rafters with all kinds of unique gifts including books, retro toys, dragons, magic wands and playing cards. You can get a “Potion To Go” from the Golden Broomstick Takeaway and while away an hour or so in the Enchanted Manor where we bring to life the “Lost Years” as depicted in the best-selling Chronicles of Wizard’s Thatch series of books.

So, what if William Shakespeare really had been a time travelling wizard? Would the world as we know it be a different place? Or perhaps it would just seem like it? Would it be a more dangerous place, populated by strange and yet wonderful creatures? Or would it be more magical, with everything just a little bit more vibrant and colourful?

What it would certainly mean is that magic was real – not sort of real, but really real, just like dragons and fairies and witches. And maybe you’d be different too…

Or perhaps you already are and you’re just hiding your true nature – you’re in disguise as it were… Whatever you are, we would like to appeal to your true nature – the real you – whether you be wizard, mermaid, time traveller or fairy princess. No matter what you are, or what you might like to be, we invite you to come and seek the magic for yourself in a world where they’re not fairytales, they’re history – and where the only possible explanation for Will’s transformation from a relatively uneducated 14 year old schoolboy to the world’s greatest playwright involves magic and time travel! 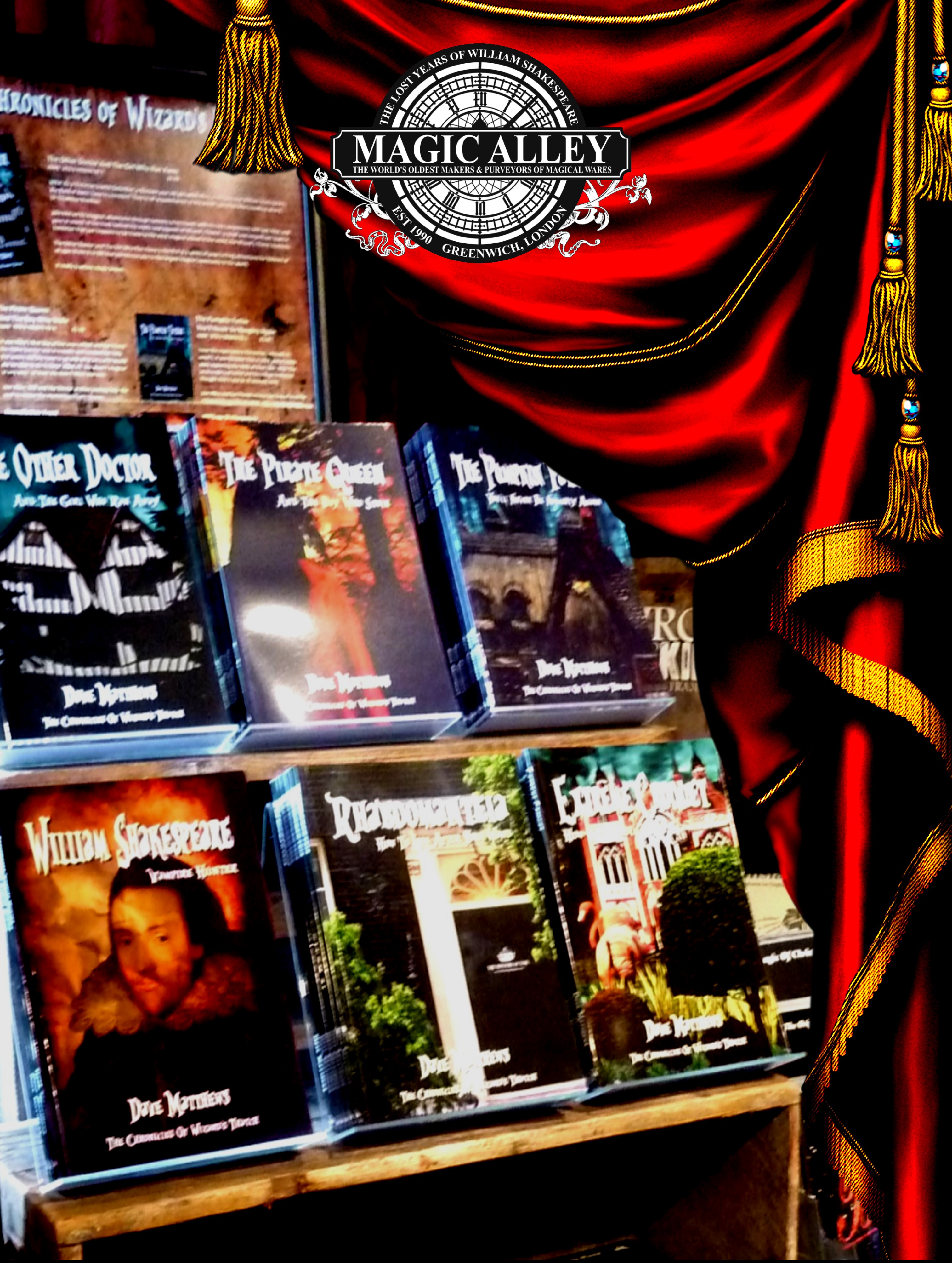 No visit to Magic Alley in Stratford upon Avon would be complete without sampling one of the scrumptious beverages available at the Magic Alley Café including our world famous “Original Tudor Recipe ButterBeer”. That’s right, ButterBeer really is a real drink. First appearing in recipe books around 1588 it’s a rich, spicy and creamy cold drink that has to be tasted to be believed!

The Magic Alley Café offers potions to go, in addition to the comfortable seating areas in the newly extended Magic Alley flagship store in Bell Court and watch the world go by from our huge windows.

Simply choose your drink, order at the desk and it will be made fresh for you every time…

Of course there’s much more on offer as well as Biscotti; Gingerbread witches and cauldrons; Blueberry Muffins and Gluten Free Cookies.